A lot has happened in a year. Last March, I nervously attended the Florida Christian Writer’s Conference and submitted a book proposal on dating. After winning the Writer of the Year for the proposal, I signed contracts with Amanda Luedeke of the MacGregor Literary Agency and Regal Publishing.

And today, my beautifully covered book, The Cinderella Rule, released. 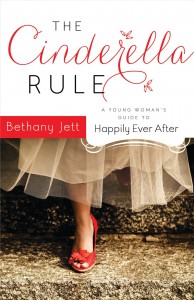 on sale at Amazon

So why a dating book?

Because dating doesn’t have to be hard.

So happily-ever-after becomes more of a reality instead of just a fairy tale fantasy.

I’m doing a giveaway later this week, so watch for details!

← Prev: Till We Get the Healing Done Next: Live Interview with Debbie Chavez →

This is my first Goodreads book giveaway -- who will be the lucky winner?? It could be you!!!! Goodreads Book Giveaway...

Along with this amazing new blog design, #TeamBetJett is launching our first ever Book Club! I knew the moment we had...