How to Host a Virtual Birthday Party 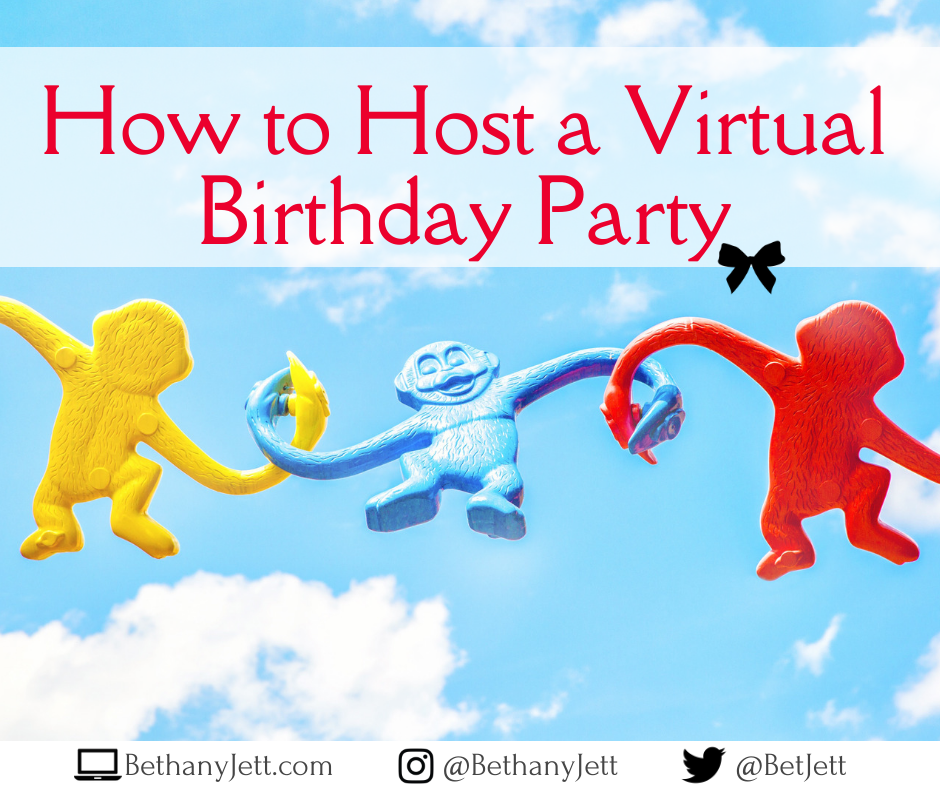 My son turned ten this year and my heart died a little thinking that an entire decade had passed. The tenth birthday is a milestone so I wanted to make sure my little guy experienced a birthday of epic proportions as he entered the world of double digits.

The son in question is my middle child, who deals with all the middle child drama—younger son to the oldest, and older son to the youngest. He has a summer birthday which means there aren’t any school friends to invite over and now that we’re a military family and homeschooling, that friend-pool is even shallower.

However, he has friends in Michigan—the children of my business partner Cyle. They play video games together practically every day and get along famously. Since there was no way to fly them down to Florida for a party, I had an idea.

Why not host a virtual birthday?

My boys have a friend who lives down the street, so we invited him to come over and I contacted Cyle’s wife Patty. Together, we planned a video game party, aka Fortnight Party, aka kids yelling at each other for taking loot and spawn-killing.

So the party is planned and all is well.

Then I went out of town to work on my upcoming book They Call Me Mom. I spent the entire week immersed in work and didn’t pay attention to my planner. I came home on Friday, kissed my kids and husband goodbye as they left on a trip to see my in-laws, and I settled in the house for some well-needed rest time.

On Saturday evening, Cyle texted me about the party.

With my kids not around constantly chatting about the birthday, the whole thing had left my mind and I thought I had another week.

I PayPal’d cash to cover pizza and cupcakes for the Young family to enjoy and I texted Justin that we were the worst. parents. ever.

After all, I’d just spent a week writing a book for moms and here I was almost missing my son’s birthday. Hot mess, indeed.

The next morning I raced to the store to grab the party décor, food, and the rest of our son’s presents before my family returned home.

It’s amazing how fast I decorated.

Justice League banners, tablecloth, and hanging dangling spiral-y decorations gave the house a festive feel. I created a soda station, gift area, and made room for the pizza.

When the boys got home, they walked into a superhero-transformed home and my hot mess moment was redeemed.

Justin  set up FaceTime so the entire party was livestreamed between our homes and kicked off the party at four by opening presents.

The kids played video games together for a while, taking breaks when the pizza arrived at both homes. Around 6:30, we took a break for cake. My husband held the phone with the FaceTime still going, my older son video-taped with my phone, and I carried in the lit cupcakes.

After a chorus of Happy Birthday, my sweet birthday boy made a wish, blew out the candles, and everyone enjoyed cupcakes. Ours were vanilla with vanilla frosting and our Michigan partygoers had strawberry with a pretty blue icing.

The kids are taking turns playing with each other and as I write this, they’re still going strong. The benefits of a summer birthday mean later nights and sleeping in, a privilege we were happy to bestow on the birthday kid and his siblings.

Phones and screens receive a lot of criticism, but the only grandparents my son saw today were my in-laws. They got to hug his neck and kiss his cheeks and wish him a Happy Birthday in person. But tonight, my mom was able to see his face and talk about her impending visit and my father was able to send his well-wishes via text.

I’m grateful we can utilize technology in this manner and that my son felt like the king of the day. The decorations I’d picked up from Target earlier that morning made my son feel special, but even more so, he was able to share his day with his friends.

At one point in the evening, my son remarked that this was his best birthday yet. I was sitting in my arm chair playing my own mindless game on my iPad and when I heard those words, my heart felt full and warm.

He was able to be with his family and friends the best way he could—in real time—and it truly magical.

I plan to host more virtual parties so that more of our family can be included and so that cousins can make special memories. But next time, I’ll be sure to pick up presents and decorations well in advance.

Have you ever hosted a virtual birthday party?

← Prev: FabFitFun Summer 2018 Unboxing Next: How to Get Rid of Leftover Halloween Candy →