We had a fantastic time on our family vacation. Justin’s family is amazing. His mother is one of twelve children, and almost all of her siblings have four or more kids, themselves. I love hanging out with them. It was a blast!

The only negative portion of our trip was on the way home. We woke up at that morning at 6 AM, had our bags to the front desk, ready for the shuttle by 7 AM (Embassy Suites ROCKS!), had breakfast, and had our three kids, my husband’s sister and her two kids, his brother, and his parents on the shuttle to the airport at 7:30.

The fourteen of us went through security without a hitch, and had the kindest security guard ever. He passed out stickers to the kids and made the whole process easier.

We got to our gate and met one of the nastiest ladies ever. Maybe she was having a bad day. Maybe she was up at 6 AM, as well. Maybe her coffee hadn’t kicked in. I don’t know what was going on, but she unleashed on my husband.

Delta’s carry-on policy is that you can have one carry-on and one personal item. Here are ours: one standard size carry-on suitcase that I flew on Delta to Minnesota with, and our new turquoise 21″ inch suitcase that we bought at the mall since our duffle bag wouldn’t survive the trip home. The turquoise bag is smaller than the standard carry-on size. 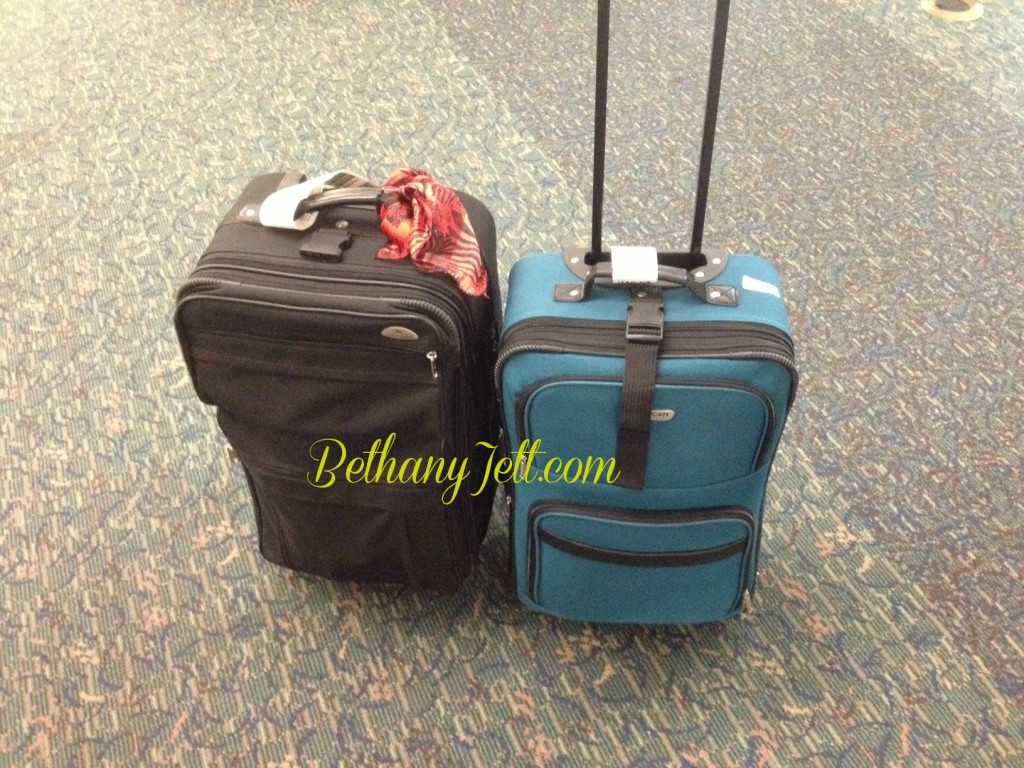 We paid for five seats, so that means we are allowed 5 carry-ons, plus personal items like purses and backpacks that are stowed under the seats. We had 2 carry-ons. That’s it. And one was smaller than average.

We were the first people to board in zone 2, so I got on first, pushing Josiah in his stroller, and then waited. Justin should have been right behind me, but he wasn’t. So I collapsed the stroller and waited. As Josiah and I were about to board the airplane, Justin came up behind me and he was MAD.

The boarding lady wouldn’t let our carry-on bags come onto the plane because they were too big and there wasn’t enough room on the aircraft.

Except they weren’t. And there was.

These suitcases are the same size as our black one.

The flight attendant who overheard Justin telling me saw our two suitcases, now tagged to be “checked” and stowed under the plane, and said, “No, they’re not too big, and there’s plenty of room.”

But it was too late.

All of the items, some fragile, that we had kept out of his parents larger suitcase that they’d checked earlier, were now headed downstairs into the cargo area. When the rest of our family boarded, they shared how incredibly rude the lady was, especially to Justin, who was silently steaming in the seat in front of me.

While this might sound like a silly thing to be upset about, keep in mind that we had fragile and electronic items in those carry-ons. Plus, being humiliated in front of a crowded airport when you’ve done nothing wrong isn’t fun for anyone.

The flight attendant, who was amazing, called the front, and told us that the captain was involved, and she apologized profusely. Again – we had paid for five seats, which meant we paid for five carry-on spaces, and now our carry-ons weren’t allowed to be with us.

Here’s how much extra room was left when the last people were boarding. Note that empty overhead storage. It remained empty the entire flight.

This situation made me think about how we deal with people in the church. The lady at the gate and the flight attendants can be compared to the ministry staff. They represent the brand, in this case Delta, and ministers represent the church, and ultimately Jesus.

Just like we’d had a long, travel-stressed morning before boarding the plane, sometimes the people who come to our church have had stress-filled mornings. They may be under extreme stress from their jobs, personal things going on in their lives, and maybe their kids didn’t behave while they were trying to get them dressed in their Sunday best.

My husband’s a youth minister, low on the minister “hierarchy,” but still viewed as a leader in some people’s eyes. Just like Delta’s staff are the first point of contact, we are sometimes the first (or only) point of contact with Christianity that some people will ever see.

It doesn’t matter if that lady at the boarding gate had a bad day. Her job is to put that aside for a while and greet the guests, just as all hospitality and service oriented jobs require. Similarly, it doesn’t matter if my kids threw a tantrum while I was putting their shoes on, or if I had a rough night the night before. I try to put a smile on my face and remember that all-in-all, my life isn’t that bad. And I know there are people at church who are having a much worse time than I am.

I know people get all crazy about the word “transparency” and this idea that if you’re having a bad day, and someone asks you how you are, you should tell them you’re not doing well. I disagree. I can share that with my friends, and those closest to me, but when I go to church, I want to serve others. I want to be a bright spot in their morning, because if they had a crazy morning like I did, they need a friendly smile and a “Glad to see ya!”

However, the gate lady reminded me of an important lesson. Not only did she stain a little of Delta’s reputation in our eyes, but she caused stress for the flight attendants who did, in fact, diffuse the situation. The other guests witnessed the gate lady’s lack of customer service, as well. Ultimately, her nastiness cost Delta money, because her rudeness and failure to follow protocol was bad enough that we were offered a flight voucher as an offering of apology.

How often do we stain the Church’s reputation, and ultimately God’s?

When we walk by people at church and don’t smile or say hi, especially those of us in leadership roles, it makes people feel uncomfortable, and they wonder if maybe that person doesn’t like them.

If you have to “turn on” and “turn off” a positive attitude because you’re “working on it,” maybe customer service or hospitality positions aren’t for you. And maybe, just maybe, leadership in the church isn’t either.

The flight attendants were amazing, though. Although they were a bit embarrassed by the gate lady’s harassment, they did everything in their power to smooth it over. This is what made me think about leadership roles in the church, and how important it is to be kind and make people feel important.

You don’t know who may have stained Christianity for them before they boarded your plane.

Strengthening Relationships: When is the last time someone made you feel special?  How can you brighten someone’s day today?